The Nuxt team has introduced @nuxt/components module with the purpose to make Nuxt development faster and to make you, as a developer, more productive. This module comes with amazing features and options that will improve your development experience with Nuxt. No matter if you’re just starting out or an advanced user, @nuxt/components provides a range of options from the simplest setup to advance configurations that will certainly benefit your projects.

In a nutshell, this module automatically scans, imports and registers Vue components found in the ~/components directory, so that we don't have to write import statements when we use them in either pages, layouts or even within components.

Here is how Debbie O’Brien explains how it works,

This module parses your template and automatically includes the component in the file where you are using it such as a page, layout or even a component. Because Nuxt.js uses automatic code splitting to split your pages by default this module works perfect as it will only contain the components that are used on that page. Also, if you use a component in more than 2 pages, Nuxt.js will automatically create a shared chunk for them thanks to the magic of WebPack.

In this article, we'll learn about @nuxt/components by example. I have setup a demo with two sets of UI components, ui-1 and ui-2.

We will implement @nuxt/components on these components followed by a detailed look at module options to customize the default behavior. Later in the article, we will also take a look at lazy-loading and auto-importing 3rd-party library components.

It’s best if you setup this sample project locally to tryout options that may interest you.

From Nuxt v2.13 onward, this module will be available by default when you create a new Nuxt project. However, you'll still need to activate it using components: true in nuxt.config.js.

In case your project is using Nuxt version below v2.13**we recommend you to upgrade your Nuxt version since there is no breaking between these versions.

💡 If components: true is set, ~/components directory is scanned by default.

Minimal configuration above is enough to get you started. However, like any other Nuxt module, the real power of @nuxt/components lies in the module options. Before we take a detailed look, here's a one-page summary of the module. 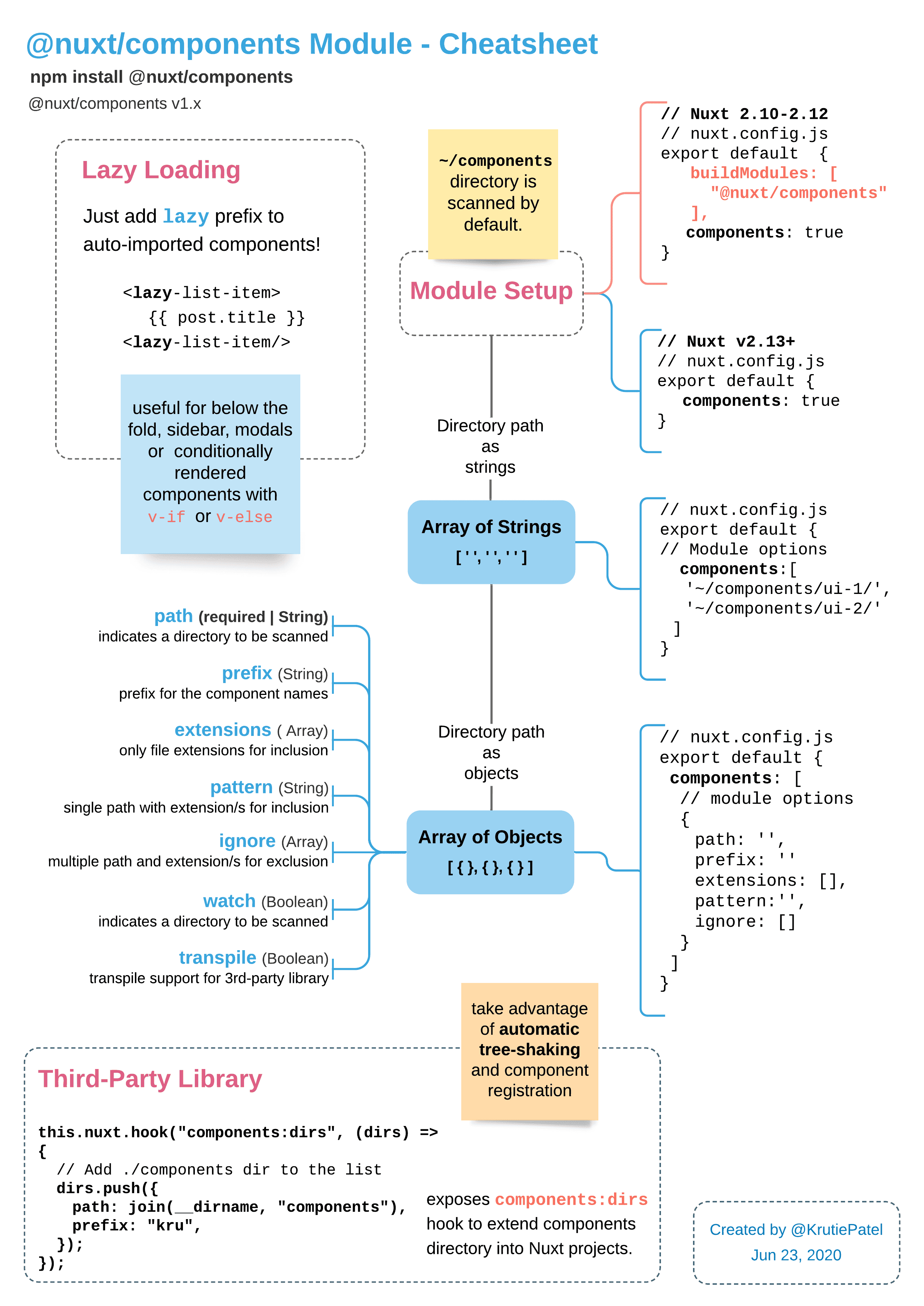 Using module options, you can select particular directories with specific file-extensions from the ~/components directory.

Let’s see both formats in detail.

Directory path as a String

Directory path as a string is a simplified version to indicate which directory to scan, watch and register.

For example, in our sample project, we can use string notation like below to auto-import every UI components located at components/ui-1/ and components/ui-2/.

Directory path as an Object

Directory path as an object gets bit more interesting! When path is given as an object, it becomes a required.

In addition to path, we can also define additional configuration to include, exclude, watch or even add prefix to components based on their location & extensions.

For example, when components are imported using this module, their names are based on their filename. But you can prefix component names to preserve their filenames as they are and still be able to customise their component tags.

It’s important to note that, the scope of these options is limited to the path provided in that object. In the example above, only components located at ~/components/ui-2/ will be registered with the prefix aex.

Try it yourself - Directory Paths

In our sample project:

With directory path is defined as an object, we gain finer control over which components are to be auto-imported, and which ones are to be left out.

Whether your components are written in .vue, .js or .ts, sometimes, you may not want to auto-import every single component files found at specified path. There are some scenarios where auto-import may need some tweaking. For example:

If your components are divided into two individual files, .vue for template and .js for script. You will want to avoid auto-importing the .js files since they're already included in the templates. In this scenario, you will want a mechanism to prevent all or some .js files from being auto-imported.

At the time of writing this article, auto-import doesn't work for dynamic components.

This is the scenario where you'll need to import your components in the script tag.

Fortunately, this module allow us to specify directory paths or file extensions or the combination of both to selectively include or exclude files from being auto-imported. Keep reading to see how.

There are couple of ways we can selectively include component files this using module.

Both .vue and .js are included as default extensions. This option is particularly helpful for components with multiple files.

In our sample project, MagicButton components is divided into two individual files, .vue for template and .js for script.

In this scenario, we want to allow only Vue template to be auto-imported. Well, extensions option helps us achieve exactly that.

Try it yourself - Extensions

In our sample project,

extensions option is best for including selected files at a given path. However, there are always advanced use-cases when we need finer control over selecting components - from within sub-directories even!

For those edge-cases, we can leverage pattern and ignore options to indicate path patterns for inclusion and exclusion respectively.

Continue reading further to see more examples of these two options and how they work.

pattern option lets you define which type of components - from the given path - should be scanned and registered. Unlike extensions, pattern is defined as a single String and it must follow glob pattern style.

We can use pattern option as default or add additional ones or even customise it completely.

As mentioned earlier, both .vue and .js are included as default extensions.

If you are using TypeScript, then ts & tsx extensions are supported by default as well.

Above code adds .jsx extension to the default pattern, makes the resulting pattern look like: **/*.{vue,js,jsx}

Customise as per your requirement

If required, you can manually specify extensions to completely customise the pattern.

Or for single file,

We just saw how inclusion patterns work. ignore option on the other hand that helps us exclude components from scanning.

ignore option does exactly opposite of what pattern does and instead of just one string, it accepts an array of strings! These strings must also follow glob pattern style.

Three individual examples in the code snippet below show how we can exclude components with .js extensions. This is particularly helpful in a scenario where you want to apply ignore-rules to sub-directories located at the given path.

It's important we highlight two similar features of Nuxt that ignore files just like our ignore option.

The impact of both .nuxtignore and ignore property is realised during build-process, and they operate project-wide, while ignore option operates locally and ignores files from /components directory.

So, if you're using 1. .nuxtignore, 2. top-level ignore property, and 3. ignore option, then all three will be merged.

Now, let’s say all of your components are automatically imported into the project and you saved so many import statements, but... your project isn’t using all of the components upfront.

This brings us to the next feature of this module that is worth highlighting, Lazy Loading.

Components that aren't required immediately upon initial render - such as components below the fold, sidebar, modals or any other components that are rendered conditionally with v-if or v-else - qualifies for lazy-loading (aka dynamic import).

Lazy loading your components is super easy with this module. You can simply add Lazy prefix to the component tag when it's used in the template area.

And that’s pretty much it, you have got your component dynamically imported, on-demand!

Try it yourself - Lazy-loading

Here, you can see that lazy components are loaded when the data becomes available, and they have their own separate bundles. See List.js, ListItem.js and ListItemIcon.js in the screenshot below.

I have created a bare-minimum external component library for you to tinker with this feature. It's called Kru-Components!

Kru-components library exposes a hook called, components:dirs, that allows you - as a component library author - to extend your components directory into Nuxt projects.

This way, components of this external library can take advantage of automatic tree-shaking and component registration.

And then you - as a user of this external library - can use kru-components as simple as a Nuxt module.

Try it yourself - Third-party library

For more concrete example, I'd recommend you keep an eye on Chakra UI for Vue as they're working towards making the library compatible with @nuxt/components.

If you've made it this far, you can see how this module presents several opportunities to fine-tune how we auto-import components and improve overall Nuxt Developer Experience. Here's the brief summary of what we learned in this article.

There are three ways you can get started with this module.

Above directory options combined with lazy-loading, this module can be used in many possible combinations. However, you can always start with bare-minimum option, such as components: true and refine your configuration as you go.

Caught a mistake or want to contribute to this blog post? Edit this page on GitHub!